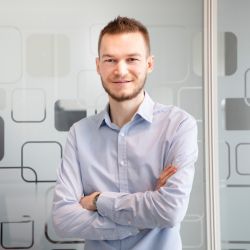 Biological processes are often carried out in the context of macromolecular assemblies. In addition, arrangements of these complexes can be dynamic, resulting in a heterogeneous ensemble. Single molecule techniques can resolve distinct populations in heterogeneous systems, in contrast to bulk experiments where heterogeneity is averaged out. In turn, mechanistic details of bio-macromolecular interactions can be uncovered. Atomic force microscopy (AFM) is a technique that can generate 3D reconstructions of individual biomolecules and complexes thereof in a label-free fashion, and with ~ nm resolution. To this end a very sharp tip, mounted on a flexible cantilever, scans a sample surface in a raster pattern using a piezo-scanner, while keeping the interaction force between sample and tip constant. In every pixel (x,y) of the scanned area, the z-position is recorded. Consequently, a 3D representation of the surface topography can be reconstructed. An alternative way to study single molecules is by fluorescence microscopy. The molecule of interest is labeled with a fluorescent tag providing high contrast. Emission of the tag after excitation, is detected through an optical system. Due to the wave character of light, the emitted light is spread out on the detector described by the point spread function (PSF) of the optical system. This effect limits the resolution achieved with optical microscopy, referred to as the diffraction limit. However, when the signal of a single molecule is detected, the position of this molecule can be determined by fitting of the recorded fluorescence signal with a mathematical approximation of the PSF such as a two-dimensional Gaussian function. This principle underlies single molecule localization microscopy (SMLM). AFM and SMLM are highly complementary technologies: AFM can provide insight in topographic features at a nanometer resolution while SMLM is sensitive towards specifically labelled molecules in complex samples. Integrated setups combining both technologies can therefore provide orthogonal information at the single-molecule level.

In collaboration with Prof. De Feyter we have developed an integrated AFM/Fluorescence microscope to elucidate the structure of enzymatic complexes interacting with DNA molecules. More information can be found on: